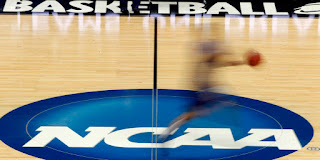 In this March 14, 2012, file photo, a player runs across the NCAA logo during practice in Pittsburgh before an NCAA tournament college basketball game. NCAA basketball administrators apologized to the women’s basketball players and coaches after inequities between the men’s and women’s tournament went viral on social media. Administrators vowed to do better. NCAA Senior Vice President of Basketball Dan Gavitt spoke on a zoom call Friday, March 19, 2021, a day after photos showed the difference between the weight rooms at the two tournaments. (Source: AP Photo/Keith Srakocic, File)

RICHMOND, Va. (WWBT) - VCU men’s basketball will not be playing in the NCAA Tournament after its Round of 64 game against 7-seed Oregon was declared a ‘no-contest’ due to COVID-19 protocols.

The NCAA said in a statement, “This decision was made in consultation with the Marion County Public Health Department. As a result, Oregon will advance to the next round of the tournament. The NCAA and the committee regret that VCU’s student-athletes and coaching staff will not be able to play in a tournament in which they earned the right to participate. Because of privacy issues we cannot provide further details.”

The announcement was made just hours before the Rams were set to tip off.

“We’ve been tested every day for the past three weeks, but within the past 48 hours we’ve received multiple positive tests. We are devastated for our players and coaches. It has been a dream for all of us to play in the NCAA Tournament. We appreciate the care of our doctors and administration this year, and all our efforts and attention will be put into our players at this time,” said VCU Head Coach Mike Rhoades.

This is a developing story, check back for updates.