rick pitino loves life iona but will he stay there

Opinion: Only time will tell if Rick Pitino is in it for the long haul at little Iona 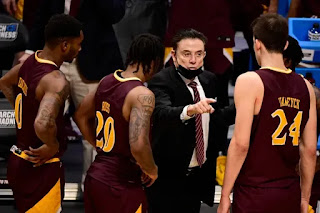 INDIANAPOLIS — The questions will come because he’s Rick Pitino.

A Hall of Fame coach with two national titles and a closet full of designer suits, he can’t possibly be serious about ending his career at a place like Iona. Some big-name school – like, say, Indiana – will find itself in need of rescuing, and will throw a bunch of money and promises at Pitino.

And of course he’ll accept because when you have spent almost your entire career at the pinnacle of college basketball, the occasional turn in the spotlight at a mid-major just won’t do.

Unless maybe, just maybe, Pitino is sincere when he says he’s had enough. That beneath those tailored suit coats he remains bruised from his ugly exit at Louisville, the scars unlikely ever to fade.

“I wanted no part of the so-called big-time anymore,” Pitino said Saturday after his latest project, the Gaels, gave second-seeded Alabama almost more than it could handle for 30 minutes before falling 68-55. “I had enough of that. I wanted to take a smaller school, like a Providence, like an Iona, a small school, and try to make it big. But I wanted no part of any of that other. I had enough of that. It turned me off, to be quite honest with you, in a lot of different areas.

“I now don't have to look over my shoulder to see who I'm going to trust, who I'm not going to trust,” he added, the aggrievance obvious in his voice.

Pitino was hardly blameless for the debacle at Louisville, which cost the Cardinals their 2013 national title and more than 100 wins. While he insists he had no role in either the pay-for-play scandal or allegations that a basketball staffer paid escorts to have sex with players and recruits, he hired the people who were responsible for the misdeeds. Ignorance is not an acceptable excuse for a coach with Pitino's résumé.

But after a year of penance, aka coaching in the Greek league, Iona came calling.

The hire made sense for the Gaels, who’d been successful but never wildly so, and needed to rebuild their program after longtime coach Tim Cluess stepped down because of health issues.

And despite the big fish-small pond optics, it made sense for Pitino. He’s from New York. His career took off at another small, Catholic school. He’d have a chance to build something again.

“I'm in heaven right now and where I need to be. It's what I call a ball, a boy and a dream, like I was when I was 12 years old. It's terrific to be here,” Pitino said. “… I just want to coach, teach young people how to become better basketball players. It's no longer about me trying to move up any ladders, make more money.”

That doesn’t mean he’s no longer ambitious, however. He dreams of building Iona into a powerhouse, a Gonzaga of the East, if you will.

The Gaels have yet to win a game in the NCAA men’s tournament – Saturday’s loss to Alabama dropped their record to 0-14 – but given what Pitino did in his first season, despite having 12 new players and going 51 days without a game because of COVID-19, it’d be foolish to bet against him.

He talked of the plans he has for freshman Nelly Joseph, who led the Gaels with six rebounds Saturday, and Osborn Shema. He talked about bulking up Iona’s schedule and its profile, with games next year in Madison Square Garden against Seton Hall and BYU, as well as playing in a tournament that includes Alabama and Kansas.

He’d also like to play New Mexico – provided its new coach, his son Richard “is not too afraid of the mighty Gaels.”

And there is that question again. Will Pitino give Iona his time? Or will he decide after another season to chase the fame and fortune that is sure to be his for the taking?

“There's some things that suck about being 68,” Pitino said. “The great thing about it is being at Iona, being able to teach with nobody bothering you, just make the players better. It's a great place to be.”

For now. Only time can prove him at his word.