President Biden falls down while boarding Air Force One 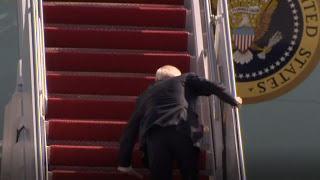 A White House spokesperson said it was very windy, and the president is "doing fine."

WASHINGTON — President Joe Biden stumbled three times while climbing the stairs to board Air Force One on Friday.

It happened while the 78-year-old was departing Joint Base Andrews to fly to Atlanta, where he and Vice President Kamala Harris will console a community just days after a white gunman killed eight people, most of them Asian American women, at three massage businesses.

Deputy Press Secretary Karine Jean-Pierre told reporters the nation's oldest president was "doing fine" after he fell, according to The Independent.

“It was very windy. I almost fell coming up the steps myself. He is doing 100 percent,” The Independent reports she said. “He’s doing fine. He’s preparing for the trip just fine.”

Late last year, Biden fractured his right foot while playing with one of his dogs.

Friday's presidential trip was planned before the metro Atlanta shootings, as part of a victory lap aimed at selling the benefits of $1.9 trillion pandemic relief legislation. But Biden and Harris have adjusted their plans in light of the tragedy.

Before they departed Washington Friday morning, the 46th president expressed support for the COVID-19 Hate Crimes Act, a bill that would strengthen the government's reporting and response to hate crimes and provide resources to Asian American communities.

“While we do not yet know motive, as I said last week, we condemn in the strongest possible terms the ongoing crisis of gender-based and anti-Asian violence that has long plagued our nation,” Biden said in a statement.